LET ME TAKE YOU DOWN, ‘CAUSE I’M GOING TO STRAWBERRY FIELD

This blog aims to document the rise and rise of the new building, that is  Strawberry  Field, on the old site in Woolton, Liverpool.

I am delighted to be invited to join the team that will help to promote this exciting new project, as Honorary President.

In this role, I had the pleasure of attending the Groundbreaking event on the Strawberry Field building site on 31st July, this year. Lady Judy Martin, the widow of Sir George Martin, The Beatles’ record producer,  also arrived, in her role as Patron of the project.  Together with Cliff Cooper, Founder and CEO of Orange Music Electronic, Major Roger Batt, representing the Salvation Army and some of the young adults, who will be amongst the first contingent to pass through the Steps to Work programme. We donned hard hats and dug our spades into the ground. 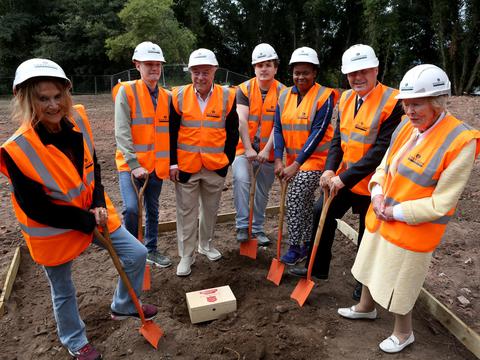 We buried a time capsule, at the heart of the new building’s footprint, 51 years after the song, ‘Strawberry Fields Forever’ was released. It contains a prayer, an artist’s impression of the new Training Hub, a photo of the original Victorian mansion, a vinyl copy of ‘Strawberry Field’ and some childhood photographs of John.

We also shared a lovely cake, made by some of the students. 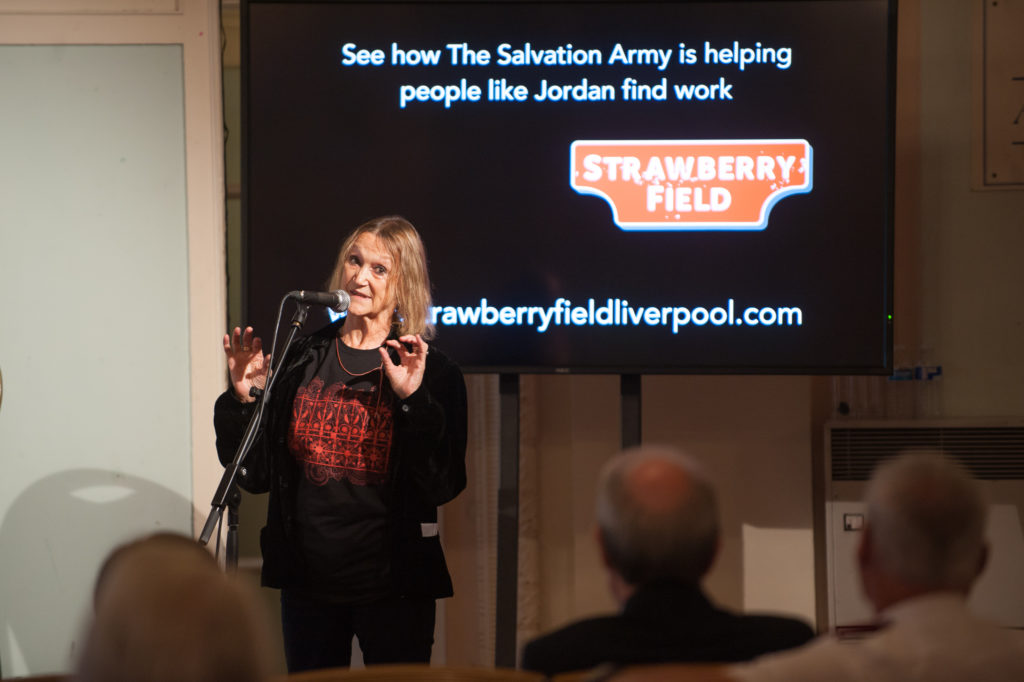 Many of you will know that this celebration of The Beatles and their musical heritage happens  every year, in the days leading up and down from the UK’s August Bank Holiday. Liverpool is alive…to the sound of  the music of The Beatles, also of the 60’s, 70’s 80’s, 90’s and beyond…to the present day in fact. The festival is centred around the most famous club in the world, The Cavern Club. From there, it fans out to include a multitude of music venues in the city. Come once, come again, seems to be the motto. Beatle fans are drawn to Liverpool by the musical magnet. In turn, we embrace them all, as we make ongoing relationships with them, loving their enthusiasm.

The Beatles’ world is never static. There is always something new to explore. Something big. Something small. A new publication. A  fab new band. Memorabilia, new and old. An new  promotion of an old idea made new.  Old friends, who were there, then, talking, answering questions, from almost the horses’ mouths.  Just occasionally, rarely nowadays in fact, there is a monumental something new. And Strawberry Field became that focus in this year’s talks.

Strawberry Field is old/new.  This incarnation is an entirely new project, based on old ideas of protecting and nurturing children and young people, who are outside societal norms, through no fault or choosing of their own. The old establishment aimed to give these children the basic ingredients for life such as food, beds, friendships, education, all in a safe environment. The feeding of the body and mind leading to the feeding of the spirit.

That place of security naturally created space for exploration of personality and potential and prospects ..  and also for spiritual growth and awareness.

Translate, if you will,  these aims to this latest project. The new. The Salvation Army is building a fantastic new Training Centre. In place of small, homeless children, this new venture will be a Training Hub for a different age group. These older incumbents will be young people with mild to moderate Learning Disabilities, aged 16 to 24. They will not be resident, but will embark on an individual programme, based initially at The Hub, for as long as they need. The programme aims to provide these youngsters with a positive sense of self and others, of their valued place in society and exploration of their place and space within it, as citizens and sharers of the world around them. A physical and spiritual growth. Just like you and me.

And there you have the nub of the talk.