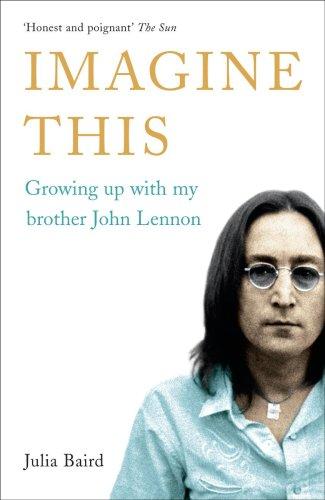 Imagine This by Julia Baird

Writing a story is a well-tried way of making sense of your life, attempting to give it shape and meaning. The putting of pen to paper, the committing of invisible thoughts to readable words allows us to perceive our world boldly and to give form to our place in that world. This book is my attempt to make sense of my own life and that of my half-brother, John.All families have secret stories and most spend their lives trying to keep them hidden, even from each other. In our family, however, our hidden histories have been hung up across the giant screen of the sky, inviting inspection and criticism from all and sundry..and dissection from the Beatle experts and the John experts. We just had to let them get on with it, knowing that much of it was wrong.

In answer to the questions that no-one asked me, I have written this memoir of our childhood. It is the result of conversations from the real people who were actually there at the time, from personal memories, from painstaking research and from emotion.

There may be some parts of our story that will touch parts of your story. 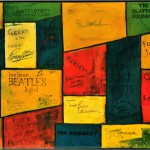 I took early retirement from teaching in 2004, in order to concentrate on writing IMAGINE THIS. In a strange twist of fate, I became a Director of The Cavern Club, in Liverpool, that same year. I still can’t believe it myself!An old schoolfriend, who is now a very successful painter working in Ireland, created this wonderful poster for me. I saw it from time to time, in her studio, as a work-in-progress, developing from bare, bold colours and outlines, with layer on gradual layer of oils adding depth and clarity. This eventually grew into a truly rich and stylised representation of the wall at the back of the main stage in The Cavern Club. All the Beatles signatures have been incorporated. As soon as I set eyes on the finished product, I began to have ideas as to what I could do with it. I have the original on my wall and have only recently had it reproduced to the highest standard I could find.

This is the description from the Printer’s Workshop:

Image digitally photographed from an original oil painting, printed by Lithographic Process on to 200gsm Silk coated Art Paper, coated with matt invisible sealer, then give a Linen texture after printing, to replicate the canvas of the original.

Please browse the rest of Wendy’s art store at : wendydison.com…she is an innovative and exciting artist.

In conversation with Julia, Paul talks warmly about the early years, from his relationship with John and their first meeting at the Woolton Village Fete, to the early days of The Beatles. Recalling fond memories of friends, family and neighbours, this is a genuinely unique piece of Beatle history.That is on the back of the cd. as a promotion. Let me tell you how this conversation came to be.

I made the recording of Paul and I talking back in 1987. We sat in his office, on the top floor of M.P.L. in Soho Square in London, eating sweets that I had brought with me from Liverpool..Everton Mints! I have to say here that that has no bearing on the football team that I support!

Although Paul’s staff kept coming in to say he was late, later and later than late, we just kept on talking. When we finally wore out the tapes, we left. Paul is like that.

I went to meet my cousin, round the corner..and told him what I had been doing. I went to show him the tapes. I turned my bag upside down on the seat…no tapes! David and I walked back, slowly, to M.P.L. searching the pavements, half laughing, half crying ( me!). We gave up. I was distraught.

The next day, I went back to Paul’s office, as a last resort…and you can guess the rest…this fab interview had never even left the building!

I have had it put onto cd..and lasered to get the best quality recording…and I have also had as much of me taken out as possible…Paul is great, as you would expect…I was dithering.

The result is Paul at his chattiest, wittiest, relaxed and most informative best, talking about everything from his own childhood, to his early memories of John and our Mother…and just for fun, the history of the Beatles. I still listen to this from time to time. It makes me laugh..it makes me cry. Paul is still the same.